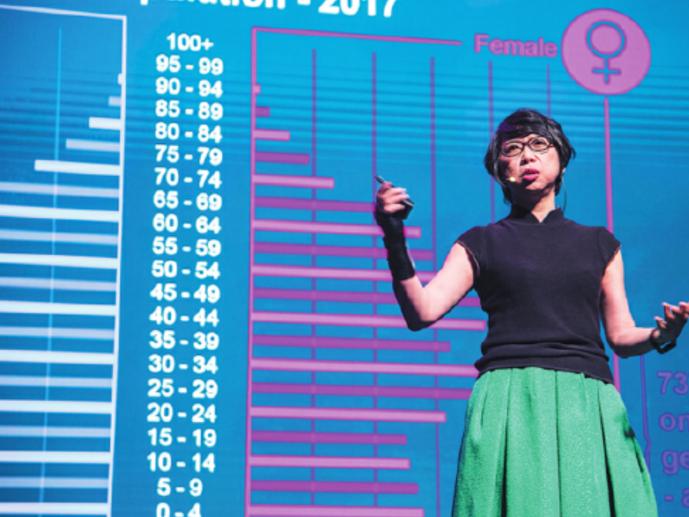 Bessie Lee, 52, the first Chinese female CEO of WPP China, the communications group, quit last year to set up her own business. Fifty, she said, is just about the right age for career professionals with entrepreneurial ambitions to start up.

In 2015, even while working with WPP, Lee founded Withinlink, a startup incubator and strategic venture fund to focus on marketing technology for China’s advertising, media and communications industries. WPP allowed Lee to use 40 percent of her time for growing her own business.

Now, Lee has all the freedom to set the future direction for Withinlink. More importantly, she enjoys the opportunity to share with the outside world the exciting developments happening in China.

Having worked with the world’s largest communications group for 27 years, Lee has developed an ability to discern companies that could be good targets for investment. In less than three years, Withinlink has invested in 14 companies whose total market value has surged by over 10 times since.

“Our rule is to invest very selectively and seek deep incubation,” she said.

The investment choices made are somehow like “love at first sight”, for all of the invested startups have provided technologies or solutions that can directly address the industry pain points, Lee said.

Kuaizi, an artificial intelligence or AI-enabled creative platform under Withinlink’s portfolio, can provide advertisers with various creative plans based on users’ prefer-ences. Machine learning is adopted in Kuaizi’s solutions that can significantly reduce cost, which traditional agencies can hardly attain.

QuickDecision Technologies, the market research platform under Kuaizi, has also applied AI in its research, which can reach wider interviewees and come out with research results faster. Its efficiency has attracted even leading fast moving consumer goods companies to give up long-time partners. And QuickDecision managed to break even in less than one year.

To Lee, these are disruptive innovations in the marketing and advertising industry in China.

“Quite a lot of people still hold the stereotype that Chinese companies are copycats. But the fact is, China is now home to so much original innovation. While I was in WPP, I was so eager to share with the rest of the world this fact. However, there were limitations on public speeches. But now, I am not bound anymore,” she said.

Technological advancements in China have changed the landscape in the marketing and advertising industry in the country so tremendously that a large part of the market potential remains untapped yet, according to Lee.

One example is the over 25 billion yuan ($3.7 billion) advertising income that internet giant Tencent reportedly reaped from its social networks in 2017. This number is likely to reach 50 billion yuan this year. But, according to Lee, these numbers are not part of any report.

“Concerns have been expressed that the adspend in China has been contracting over the past few years. It might be true if it comes to the traditional channels like print media. But the surveys have not included the numbers in the digital area like WeChat Moments, where the future lies,” she said.

Smaller startups, rather than the large communication groups, are quicker in responding to the trend. So, large corporations should have the sense of an impending crisis to be able to respond better to the changing scenario, she said.

“It seems that the large market players are holding a defensive attitude instead of an open mindset regarding the changed landscape. But the truth is, the smaller ones will not die because of the bigger ones’ defense. Advertisers will eventually skip the large agencies and go directly to the smaller companies,” she said, suggesting that cooperation or even acquisition of smaller, niche players with specific expertise or specialization is the right way out for large corporations.

On her outlook for the companies in Withinlink’s portfolio, Lee said they might not grow into so-called unicorns as most of them are facing businesses rather than consumers,. “Small rhinos” is how she would like to describe the companies that Withinlink invested in.

“The rhinos are quite dashing. They are willing to team up with each other. I hope that our invested companies can work together and generate the power of a unicorn,” she said.

To be sure, Withinlink has ambition. Over the next 10 years, there will likely be further consolidation in the Chinese marketing industry, which will see the rise of an all-in group. And that could well be Withinlink, Lee said.