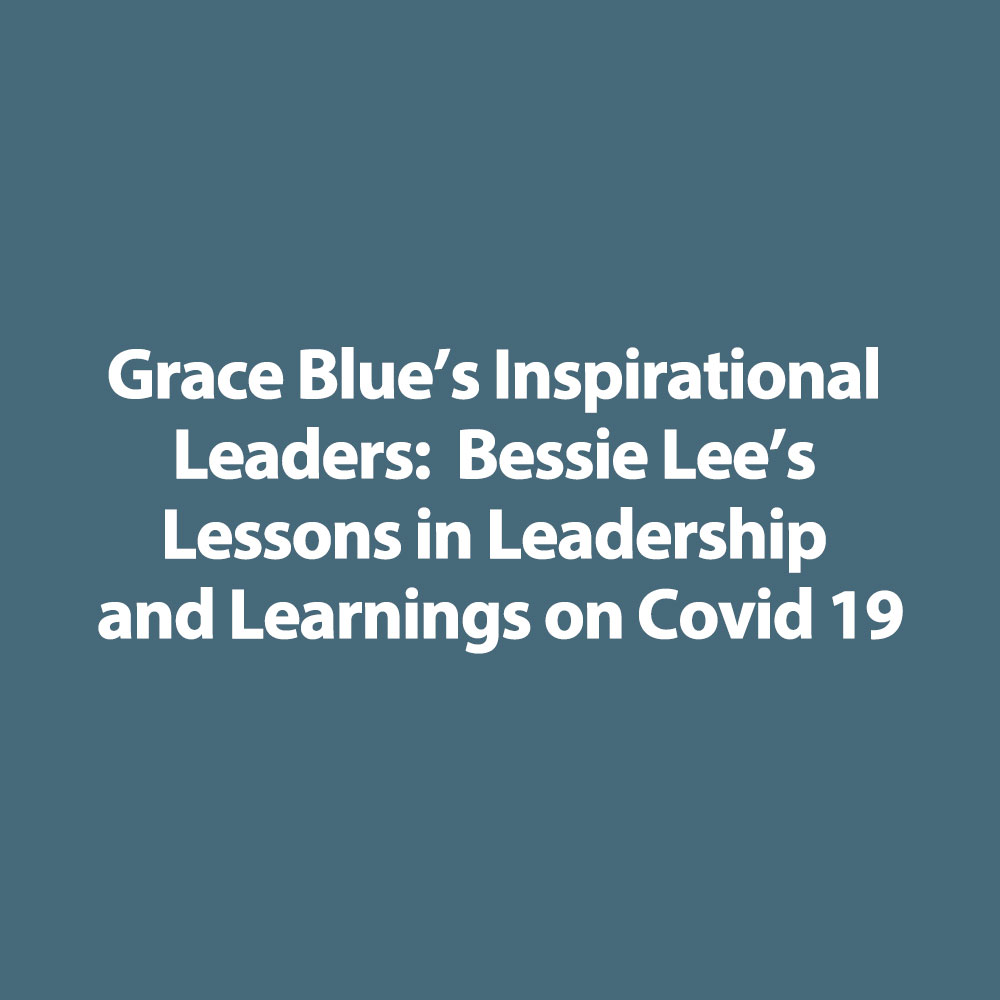 对不起，此内容只适用于美式英文。 For the sake of viewer convenience, the content is shown below in the alternative language. You may click the link to switch the active language.

As a continuation of Grace Blue leadership talks, we were delighted to talk with Bessie Lee (Founder and CEO of Withinlink, ex-CEO WPP China) to discuss her lessons in leadership and her learnings of the Covid 19 pandemic in both China and the UK.

Bessie has been living through the Covid 19 pandemic in both China in the UK. Bessie was living and working in Shanghai when the pandemic took hold of China and having travelled to London for business in late February, was in UK when the pandemic broke here, which is where she remains in isolation. Having been in both countries at the very sharp end of the pandemic Bessie has a unique perspective on how the two countries have responded to the virus. Of course, firstly she has witnessed the scale of destruction, misery and fear the Coronavirus has put upon both countries but she has also been a first-hand witness to the difference in the country’s responses. As well reported, China’s lockdown restrictions where severe and unwavering during the peak of the virus. She believes a large part of the reason the public were so responsive to the severity of the lockdown was due the infrastructures of the country. China, being one of the most ‘digitalised’ nations in the world were able to quickly adjust. Their advanced eCommerce infrastructure seamlessly adapted, and so businesses could provide groceries / amenities to the public, without websites crashing and production slowing. Wider business adapted too, again with the country’s advanced digital adoption, across generations and industry, businesses were able to innovate their offerings and/or products so even with the unprecedented disruption to the economy ‘business’, in the whole, was able to continue and evolve. This adoption of the ‘new world’ both personally and professionally is the main difference that Bessie identifies between the UK and China. For both country’s leadership will be absolutely paramount to how both countries navigate through this most challenging of times.

As we talked more around leadership it became clear that for Bessie, great leadership is a balance; at times leaders must be able to direct, inspire and take people on journey. Leaders, especially in business, must also have humility and recognise they are reliant their teams/ people around them and these individuals must be given the autonomy to also ‘lead’ and influence. She believes that teams and individuals will naturally have different skills sets and qualities and therefore these individuals will often be more skilled, experienced and knowledgeable in certain fields, than the ‘leader’ they report to. Embracing this rather than being threatened by it has been crucial to Bessie’s success as a leader. It’s not only allowed her to attract the very best talent into the organisations she has led, but perhaps more importantly it has allowed this talent to thrive and grow in those organisation, thus fundamentally changing the future of those organisations. Bettering the future of any business has always been fundamental to Bessie as a leader and as such another key focus for Bessie has been succession planning. Whether being a country CEO of within a global network or a founder of tech start up, envisioning the trajectory of that company and what the business will look like in 3-5 years’ time has always been vitally important to Bessie. Focusing on the future has meant Bessie would identify future leaders within her organisations who are equipped and capable of taking over from her at the appropriate time, therefore naturally evolving and moving the business forward. Again, this all comes down to being humble as a leader and understanding that for any business to evolve, the leaders must embrace, and allow, their talent to be fundamental in driving forward that future.

Looking forward to the future and what the world will look like post this pandemic, Bessie gives us hope as she talked about how China is now starting to stabilise and some form of ‘normality’ is slowing returning to the country. We are also witnessing this as our own Grace Blue team in Shanghai and our clients in China have been physically back in the office these past four weeks. And although we are seeing both ends of the spectrum through our teams in APAC (Singapore going into its full lock-down along with much of South East Asia and Australia) China although still very much living through the pandemic is starting to stabilise. It is ever watchful of a “second wave”, but offices are again open, people are flocking to outdoor parks, restaurants are welcoming back guests. The world has kept on turning, as it must for all of us, and China is genuinely emerging from the other side after over two months of stringent containment.

China is masterful at adaptation, innovation and improvement. It is country which has had the muscle memory to adapt and overcome throughout modern history. And in the past few decades, it is how it has made so many seismic leaps technologically and digitally to advance infrastructure. Commerce, and customer’s experiences. Its journey has never been linear and it uses challenging times to innovate and develop. So, on the other side of all this, it has shown us that not only can we get through it, but that the innovations, developments, lessons, meaning we take out, will hopefully give us a new type of future all over the world.